After more than an year, my webcam working under Linux 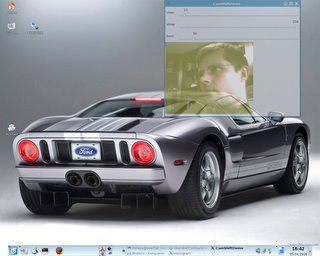 Around a year and a half ago I purchased a super-cheap Q-Tec Webcam 100 USB. I was not supported under Linux (and barely supported even under Windows after all you could never know who really was the manufacturer of the thing).
Originally intended to help me in some ARToolkit and OpenCV explorations under Linux, it ended up supporting video conferences in Skype and MSN in Windows.

Occasionaly I poked around to see if I could wrangle some other driver to make it work. The most promising was this http://gkall.hobby.nl/pac20x.html, but the furthest I could go is making Linux detect the camera was plugged and load the proper modules, but it never worked. One funny thing I learned from that site is that the exact same hardware is embedded inside a microscope for kids called Meade MicrOcular.
Well, following the Xgl hype in this beggining of 2006, I decided to upgrade from the nice Kubuntu Breezy distribution to Dapper Drake just because of superior the eye candy. But when I gave the old webcam a try, it worked flawlessly with the drivers and software supplied with Dapper. By the way, Dapper (with Kubuntu) is a damn good desktop.

Very nice! If things start working like this even for odd hardware in Linux maybe in a couple of years we will all forget how to compile kernel modules. You can check a picture of the webcam image in a OpenCV window made transparent and rendered by Compiz.
Posted by Fábio at 12:43 PM