Keep track of your ideas consistently - but then start!

Being aware of good ideas as they appear and having some way of keeping track of them is very important. Usually we can't summon good ideas as needed, so most forms of creative work can benefit greatly from a buffer that decouples idea consumption and execution.
Jotting down ideas also works as a process of self-discovery. Giving some shape to your potential projects will help you define what kind of things you'd like to do in the future or in which direction you should steer your career or life if those ideas really matter to you.
I only started keeping track of ideas in a more systematic way in 2008. Even having started late in life as I had, by now I've already gathered hundreds of ideas of many types
(blog posts, games, mobile apps, DIY projects, web startups, insightful talks, research projects, comic strip plots). Looking at them now makes me proud for having had them for their content and diversity, specially when I rediscover some forgotten ones that still look good.
Obviously those ideas are not going to execute themselves and since some of them are really cool or will allow me to move forward in some aspects of life, I'd like to take steps to get them moving. Today they are nothing and are expecting me to get them out of that state of nothingness, or unrealized potential. After all, good ideas are a dime a dozen, and execution is all that matters.
A huge backlog of unexecuted cool ideas can also be a bit of a psychological burden because it is, after all, a list of cool things you're not doing right now as much as a list of things you'd like to do. The trick is using is as a lever or motivation to overcome inertia and avoid letting it become a trap or weight and the 'I suck because I'm not doing the ideas' mentality.
Which brings me to the next point: There's never going to be free time if you don't start making it, and nobody is going to bless you and say 'your idea is really cool and I know you have big potential even though you never showed me any concrete output, so I'll give you an authorization to execute them'. In the beginning you are the only believer, and there's only be momentum on your thing if you start it and push it for a few rounds.
Posted by Fábio at 7:39 PM No comments: 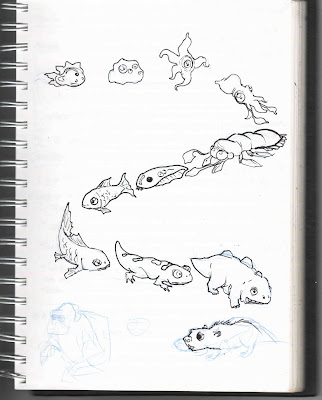 I always like to write things down while working, specially if it's something more intellectual like writing a paper or thinking about algorithms, data structures or software architecture. Writing helps a wandering mind settle on a subject for a while. Last year I started using sketchbooks without rules as work journals because they feel a lot like using a whiteboard, and are a lot less restrictive than ruled notebooks, even for writing.
The downside is that sketchbooks invite you to sketch, and I find myself occasionally doodling on the pages instead of doing my primary work.
Here's an unfinished drawing made while I was thinking about how a sense such as vision came to be possible, and what are some plausible evolutionary paths for such trait. I'm not interested just in eyes, but mainly in the processing of visual information and how knowing that could help we find new approaches for computer vision and in what tasks vision is used. Maybe that's a path that will lead us to know better what it means to see and what we can do about it.
I didn't finish it because the inking on the top figures didn't quite satisfy me, and also the monkey and rodent-like creature at the bottom weren't nice. I'll give another shot other day.
Some interesting pointers related to this subject (the evolution of vision and visual processing):
Richard Dawkins on the evolution of the Eye (Youtube video)
Other Richard Dawkins video about eyes
The Evolution of Visual Processing and The Construction of Seeing Systems, by G.A Horridge
Evolve:Eyes documentary and a review of it
Posted by Fábio at 4:06 PM No comments:

A viable business model in the iPhone App Store?

In this little more than a year of iPhone App Store we have some stories of guys that coded a simple game at home and made about or more than half a million dollars, and others about developers that quit everything to work with iPhone programming and didn't make even a $1000 from their effort.
Yesterday the great developers at NimbleBit software released some of their sales numbers. That's very nice because, as they define themselves, they are somewhere between rags and riches.
What caught my attention is that they seem to be close to something that could be called a viable business model, some of the numbers:

Now what do I define as a viable or supportable business model? At least in indie game development, I'd say it would be a business model where the business owners would be financially compensated at least close to what they could make working as employees in the game industry, but doing what they love, having better chances of expressing themselves creatively and having no boss.
According to these criteria, I think NimbleBit might be getting close. If we account for all of their 5 games (Hanoi Plus, Scoops, Textropolis, Kryper and Sky Burger), they took 8.75 developer-months, bringing in US$ 189880 of revenue. Counting only the declared development time for each game, each man-month (I know, I know...) brought in a revenue of US$21097.00, which is great.
If we assume that all three members of NimbleBit have been at it full-time for about a year (probably doing marketing, systems and business administration and other activities that surely consume their time), the revenue (not net profit) for each one is US$63,293.33. Update: See NimbleBit's Ian Marsh's comment below.
Taking into account that an average professional working for the game industry in the U.S. earns about $79000, but if you count just programmers the average salary is $85,000, we'd say the folks at NimbleBit are doing worse financially than working as employees, but are at least close, which hints that they might keep doing it sustainably (income data according to Game Developer 2008 Game Industry salary survey, which I don't know if is after or before income tax).

Scoops, the game that made US$ 140,000 so far
NimbleBit games are very polished, though simple, and this is a nice part of their strategy. Since nobody knows which game will be a hit, they release a new game about every month. That's also what big game companies do - churn out a lot of games in the hope that one of them will pay off and turn a profit.
The caveats in this story are that Scoops was about 10x more successful than the other titles, and it is not going be a sustainable endeavour if once in a while they don't turn out a hit (albeit a mild one), and that we are looking just at revenue, we don't really know how much they spent so really it's best to avoid jumping at conclusions.
Still, it's a very nice story. They are putting in some hard work, keeping their eggs in many baskets and getting results that I hope allow them to get by and grow.
I compiled a ton of stories about failures and successes and business strategies at the Apple Store or other mobile stores, you can find them at this Diigo list. Update June 17: this Google Notebook Page also contains the same clippings that are in the Diigo list.
Posted by Fábio at 12:52 PM 13 comments: 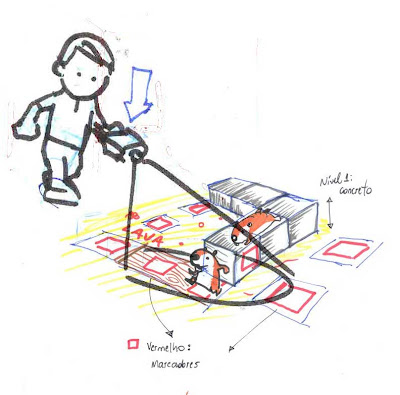 Part of the research I did in the last 3-4 years at the university I work for was based on spatial augmented reality (Spatial AR). The basic ideal of spatial AR is having the virtual augmentations appear directly over real objects, instead of using a screen or glass to superimpose them on the sight of the viewer, and the prevalent way to do that today is using projectors or projector-camera systems.
The focus of our research was at using low-cost tracking trying to create applications that make some practical sense (as in they are not only simple demos, they could eventually be useful) and study interaction based on mobile and portable projectors to try to make such programs usable at all.
We achieved some moderate success (defined by achieving the Best Paper Award at the most important conference in the area in Brazil - a shorter version of this paper) . I'd like to point out that I am just a collaborator and co-author of those works, Romero Tori, Eduardo Jacober, Cláudio Bueno and our students Lucas Trias, Newton Nakamato and Mark Hodgkin were also heavily involved.
Our next project was a game using spatial augmented reality, specifically tracked mobile projectors capable of delivering 3D augmentations nicely registered on the top of real objects . This project is on hold for now, because I am in a leave of absence from the Professor job to try to finish my PhD (in some private colleges and universities in Brazil you can still get a teaching/researching position before completing your PhD), and Eduardo went on to shift his career focus to a government IT career and being a professor just part-time.
Well, this will be completed some day, maybe with the help of some students. For now I'd just like to share some conceptual sketches. The nice thing about being an engineer/programmer that works with interactivity and games on occasion is that I get to put my drawing skills to some useful purpose. 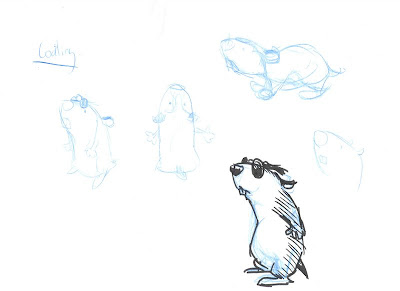 
This video was somewhat hidden in Google Video and I decided to post it here. Any day now the Woxbot will be uploaded to Sourceforge.

I need to gather and post more resources about the Woxbot, including my Masters dissertation in a more proper way, but for now you can check this paper.
Posted by Fábio at 10:18 PM 1 comment:

A little more about the process designing the little robot in the logo of the IEEE Automaton Weblog.

The sketch in the middle was the one that captured best the overall tone they wanted to set for the blog, a homebrew, clunky, hobbyist-friendly robot. I did the wireframe (left) just as a WIP shot, but it ended up being selected over the final artwork (right, and also here toon shaded). You can see that the "eyes" and the wheels are pretty much the same throughout the process (and maybe the only parts that resemble the initial sketch :) ).
Those were modeled in Wings3D, the most user-friendly and easy to learn 3D modelling package. It's also free and open-source, and is probably the most famous program coded in Erlang, discounting the hardcore mission-critical telephone centrals manufactured by Ericsson.
Posted by Fábio at 7:36 AM No comments:

Who could guess? More robots

More sketches of robots, those were quick studies for the Automaton logo. Both the Automaton guys and I liked the first one more. 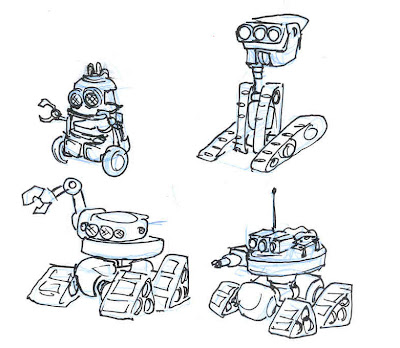 My least preferred was the last tank-bot, due to the combat aspect.
Posted by Fábio at 7:23 AM No comments:

I almost forgot  to upload these sketches these latest months. But since someone posted a comment in some older posts, I felt an energy boost to keep going :)
Weird character faces, scanned from my developer notebook back in 2000. 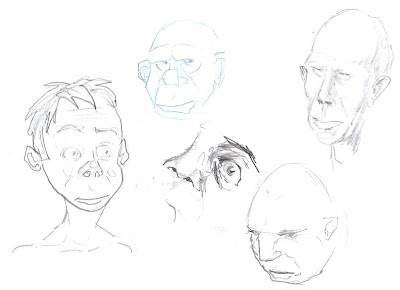